​CD Miller is a fantasy and horror author. Dark Heights is his first published novel, now available from Serial Box. He is hard at work on many projects to watch out for, including: an epic-fantasy-remix series of novels; literary superhero fiction; a novel of character-driven, alternate-universe fantasy. 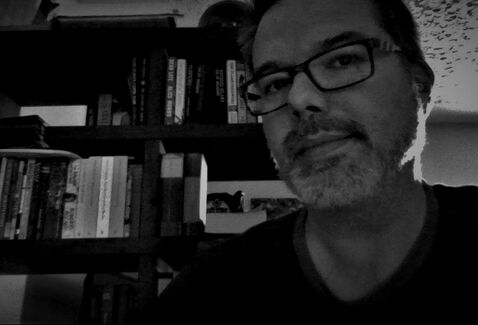 what you need to know about dark heights

Dark Heights started out as an experiment in defeating procrastination and perfectionism, a serial novel that would be published regularly online no matter what shape it was in. I wanted to work on something that would explore current issues and get into the personal lives of the characters with some intensity. And I wanted the story to be able to turn, in sudden and unexpected ways, towards a kind of vivid and visceral modern fantasy/horror, with the sense that anything can happen.

Very early in the process my brother, Chris Miller, an accomplished composer and musician, came on board to create music for the website. As we began to explore both the fiction and the music, we realized that we wanted to collaborate and produce the content together. As a writer, I came to rely on Chris's evocation of the emotions and atmosphere of the world of Dark Heights. We create every chapter together. Sometimes Chris will write the music based on our conversations about the fiction and I'll use it to work on what I'm writing. Sometimes I give him a finished chapter and he writes and records the music. Quite often we've shared drafts and notions of what we're doing and the music and the writing changes as our work takes shape.

Once you read a few chapters you'll realize that Chris's music doesn't operate like a typical movie soundtrack.  It doesn't score the prominent moments like signposts telling you what to think and feel. Instead he opens the chapters up from the inside, building a complementary narrative in music that reflects what the fiction is doing, in particular what the characters are thinking, feeling, and what they go through in the story.

Dark Heights is the fiction and the music, together. We've searched very hard to see if anyone else is doing anything like this. Doesn't look like it.

In late 2018 we reached an agreement with Serial Box, and they are now the exclusive publishers of Dark Heights. You will only find Part One in their app or on their site. Part of what they do is the production of an audiobook, which is of  the highest quality imaginable. It is amazing to listen to and you don't want to miss it.

Chris and I will still be developing the story of Dark Heights here, on our original site, where you can read all the new content for free. In fact we are a few chapters into Part Two already, and there will be a Part Three that will complete the Dark Heights story experience.

This is your invitation.  Come and get lost in this world with us.